7 Reasons Why IT4IT is Good News for Enterprise IT

Most big companies wish they were a lot better at running enterprise IT more like a business and less like an artists’ colony.

It’s the norm today for every stage of value creation in large IT shops to suffer from too much friction in teams and between processes, inadequate control metrics, brittle handoffs and unsatisfactory operational practices.

At the same time there is immense pressure to leap ahead on value, cost and speed, and to have the right position on current hot buttons such as cloud, security, DevOps and so on.

How can IT4IT help a CIO show real progress? Here are seven reasons why it’s actually a big deal:

When I show this model to pretty much anyone living in Enterprise-IT-Land, they quickly find themselves somewhere on the map. That’s a key starting point. This instant recognition is in stark contrast to esoteric models like ITIL and COBIT, which are robust, complex, very useful to experienced practitioners – and incomprehensible to most people, including most IT professionals.

Yet IT4IT is completely mappable to the more formal models needed by auditors, process engineers and tool builders. It bridges a critical semantic gap that can be the key obstacle to implementing best practice.

Corollary: The IT4IT Forum must resist the temptation to turn IT4IT into another complex, impenetrable standard. Its fundamental clarity is a great achievement.

The Open Group IT4IT Forum certainly includes vendors with a marketing agenda, such as IBM, HP, Microsoft and ServiceNow, to name a few. But none of them own it. That’s important.

The Forum also includes thought leaders from industry and government – enterprise IT experts who have a vested interest in keeping Open Group work open.

This matters because other big best practice IT models, valuable as they may be, are skewed to commercial or professional agendas, resulting in uneven depth and coverage.

At worst they are specifically designed to help salesmen lead inexperienced users down an attractive path to a particular vendor’s offering.

At best they are designed for a narrower audience than the CIO, and often gloss over anything not deeply interesting to their target group.

Try asking an ITIL practitioner which metadata should be packaged with a software release in order to facilitate automated closed-loop defect management. Ask how exactly that might be achieved in a typical application development shop – or what packaging rules are needed for a typical infrastructure engineering release. They probably won’t find the answer in their ITIL manual.

Similarly, COBIT does a fantastic job of describing every process that matters to enterprise IT, and is pretty complete when it comes to naming the important inputs and outputs – but it doesn’t tell us what they look like. It’s a great resource for anyone trying to improve IT value delivery at scale. But it is intractably skewed to the concerns of auditors.

3. It is based on value chains

The secret sauce in IT4IT is that it starts with value chains – a tried and true way of thinking about how value is created in all types of business.

By using a conceptual starting point familiar to every non-IT executive in a large enterprise, IT4IT from the very beginning makes sense to that audience. As IT organizations create tools, processes and investment plans based on this model, it remains easy (if done correctly) to map these directly back to enterprise strategy.

This means we can start to measure Enterprise Architecture outcomes using the only important metric for commercial organizations – dollars.

We can know what we’re talking about when we claim our IT investments have something to do with the actual purpose of the enterprise (which is never making back-office IT operations more elegant).

4. It is about service delivery

A recurring wistful meme in enterprise IT has been the idea of the Service.

There are lots of variations on this theme. IBM’s 20-year-old Service Oriented Architecture is a premier example of this attractive idea. The work done to implement SOA in large organizations is also a brilliant example of how hard it is to move the needle in the real world. Trying to migrate the status quo to a new paradigm is a difficult endeavor.

IT4IT gives us a fresh, comprehensible template for understanding services in the large – and in the cloud as well.

When I first showed the service delivery components of IT4IT to a seasoned traditional architect, he raised his eyebrows and said “That looks a lot like cloud,” to which I said “Yes it does.”

He wasn’t sure non-cloud apps could be delivered in that model. Actually the point is that non-cloud apps are missing something, and at worst will have to be encapsulated in a service oriented wrapper to be useful in the virtualized, cloud-centric world of modern enterprise IT.

We need a way of understanding that our work that is all about services, not about infrastructure ops examples like “provision a server.” If that’s all we needed to think about, we wouldn’t need service catalogs or IT4IT – or architecture, for that matter. We need to think about everything consumed by IT customers as a service.

Then the world starts to change.

To make all this stuff work — things like automated closed-loop defect management, DevOps, effective metering and usage monitoring, real complexity management, traceability from demand signal to runtime stack – we need a single language to describe all the information exposed across different parts of the value chain.

Only if all those bits of data fit into a single, well-ordered conceptual model, can we start to replace artistry and tribal knowledge with consistent automated processes.

Most big IT shops don’t have this today.

Why is it so hard to know how the production environment maps back to business users and their interests? One reason is that our language changes so much as the original idea wends its way through the transformations along the value chain.

The logic of IT4IT demands a common data model across the whole span of IT value delivery. By adding a consistent horizontal semantics to the vertical semantics of things like ITSM, we really can begin to get control of the whole business of IT.

The fact that IT4IT also is inherently tied to enterprise value chains and strategies means that the semantics of the operating model, even as we drill down into the details, should remain mappable back to real business value.

In the IT tools space there will be stubborn reluctance to let go of hard-won competitive positioning, fear of lost margins and declining commercial advantage, disruption of complacency, defensive moves against existential threats to tiny empires and once-solid revenue streams.

But is it really to the advantage of tool vendors to push back on standards? Sometimes it’s essential. At other times you have to let go and move on.

IT4IT was partly developed as a roadmap for vendors who understand that they need to shift their strong resources to work more complex than building a better Service Desk.

Why? Because the world is changing: However much you love the serenity of the elves, they are still marching relentlessly to the Grey Havens and will not return.

Whose Service Desk isn’t good enough, when good enough is all you need? How does a proprietary code library survive the age of Git?

There are plenty of new opportunities for tool innovators who focus on customer value. There are enough unsolved challenges to keep them busy — and prosperous.

7. It can be the lens for envisioning strategic transformation

In the age of Cloud, DevOps, open source, virtualization and all that stuff, enterprise IT has no chance of standing still, no matter how firmly one’s feet are nailed to the data center floor.

Your competitors always seem to be cheaper, faster, better. The shadow IT factories are busy day and night. The CEO wants to know why you aren’t keeping up. It’s not an easy question.

IT4IT suggests that part of the answer is to step back from the daily uproar, to apply a systems thinking / value chain lens to an undertaking that needs more than ever to be redefined primarily as an effective business service delivery engine.

It’s essential to understand and to be able to describe the transformational flow through the whole organization, to understand where the pinch points are – ineffective processes, poor signal-to-noise ratios along communication channels, lost data, lost meaning.

IT4IT is not the only template for making an IT service delivery heat map that shows the best opportunities to ease process flow, guide IT transformation, focus investments. But it has a lot to offer:

In the hands of a skilled practitioner, IT4IT is a valuable addition to the transformation tool kit.

It’s worth a look.

← Prev: IT4IT and TOGAF – how do they fit together? TOGAF Certified? What's Next? →

A CIO-Level View of IT4IT™

CC&C IT Transformation Lead Dan Warfield at The Open Group Conference Dan spoke on a CIO-Level View of IT4IT.... 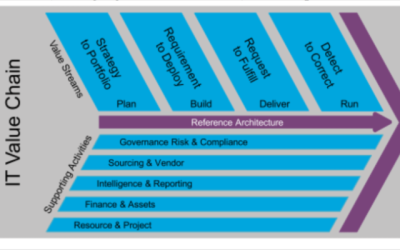 IT4IT and TOGAF – how do they fit together?

IT4IT and TOGAF can each be used in isolation, but when used together, both are stronger. In my role leading work in...